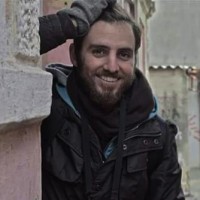 Minas Alexiou studied Fine Arts at UCA University of Canterbury, England. After graduating in 2010, he had the opportunity to work with frescoes and decorators in England and Finland. He considers unrepeatable experience a project that participated in Finland where they had within three weeks to create 14 paintings in the biggest cruise ship by then the world's «Allure of the seas".

In September 2012 he restores the opportunity to work abroad again, in London. For a time he worked in the field of maintenance and decoration of historic buildings in London and returned to Cyprus in December 2013.